Business success is contingent on product and technology, but can only be sustained by a highly skilled workforce. Felix von Nathusius, president and CEO of IFA Rotorion — North America LLC, understands this better than anyone. “If manufacturing wants to be on a competitive level globally, you need a very, very good workforce,” he said. “Apprenticeship is a great opportunity to give back to the community and develop the workforce of the future.”

IFA Rotorion took this philosophy to the next level in 2014 when it helped launch the Lowcountry’s first Youth Apprenticeship program in Industrial Maintenance. IFA Rotorion and three other local companies worked with Apprenticeship Carolina, Trident Technical College and the Charleston Metro Chamber to recruit and sign 11 high school juniors and seniors to apprenticeships.

“This is the way to go to grow the future of our workforce,” Debbi Meuli, human resources manager for IFA Rotorion said. “This was a collaboration of the industries to say, ‘Yeah, we know we are always fighting each other for talent, but here’s a way for us to come together and grow the future workforce here in Charleston and our surrounding counties.’”

EDGE: What’s the most positive outcome of having an apprenticeship program?

Joe Brinson: The most positive outcome of having an apprenticeship program is the development of highly-motivated maintenance employees who have the specific skills and job knowledge needed to make a contribution to the success of the production team. The program allows the apprentice to learn on the actual equipment that they will be servicing as a maintenance technician.

EDGE: Is there anything you would like to highlight about your Youth Apprenticeship program?

JB: IFA Rotorion is an enthusiastic supporter of the Youth Apprenticeship program. This program is a win-win-win for high school students, employers and the community. The Youth Apprenticeship program in Industrial Maintenance offers students opportunities for on-the-job training, technical training, paychecks and careers that have not traditionally been available to high school students.

EDGE: Can you think of a word or phrase that best describes apprenticeship and why?

JB: Yes, we think that the word “SEIZE” best describes “apprenticeship.” We understand that the English word “apprentice” came to us from the Latin verb – apprendere – meaning “to seize or to grasp.” IFA Rotorion’s goal is for our apprentices to “seize” the training that our experienced maintenance journeymen will provide; for our journeymen to “seize” the opportunity to mentor the next generation of craftsmen; and for IFA Rotorion to “seize” a loyal and well-trained employee.

EDGE: What do you like most about the apprenticeship program and why?

JB: The on-the-job training with the actual production equipment that they will maintain gives the apprentice an advantage versus the experienced person, who does not understand our manufacturing processes. We have also found that the courses developed and delivered by Trident Technical College have been very effective in enriching the apprenticeship program. Our experience with both adult and youth apprentices has been positive.

IFA Rotorion – North America LLC is a German, family-owned company that supplies drive shafts for passenger cars and SUVs for the NAFTA area (U.S.A., Canada and Mexico). The company is part of the BMW supplier network and also supplies parts to General Motors, Ford, Mercedes and Chrysler. State-of-the-art drive shafts have been assembled on-site since 2004. In a  facility of approximately 200,000 square feet, the SC staff assembles more than  1.7 million drive shafts per year. IFA Rotorion employs over 500 people in South Carolina and continues to add manufacturing capacity to supply customer demand. This affiliate of IFA Rotorion-Holding GmbH is the only U.S. supplier of drive shafts with its own painting facilities. 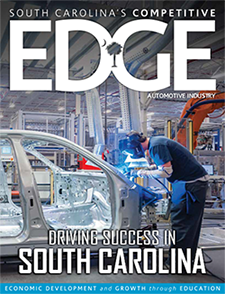