Dollar Tree, Inc. announced that it had completed acquisition of Family Dollar in July 2015, making it North America’s leading operator of discount variety stores. That same month, the company announced plans to build its 11th distribution center in South Carolina. Efficiency within its logistics systems is key to Dollar Tree’s success, so the Cherokee County project would require an aggressive start-up schedule to meet the demands of the company’s growing market share and the needs of its regional customer base.

The first foundation for Dollar Tree’s new 1.5mm square foot facility was poured in September 2015, with plans to create around 400 jobs over a five-year period. The warehouse was ready to receive product by April 2016 and began shipping product only three months later.

“The Dollar Tree startup in South Carolina was the best I’ve ever experienced in over 13 years with the company,” said Jack Johnson, general manager of DC11. He praised South Carolina’s readySC™ program as being a “good partner” in the distribution center’s successful startup. Johnson said readySC provided “help with hiring, recruiting, networking and training. They gave us a lot of support in getting the word out that we had started operations.”

According to Johnson, potential members of the DC11 workforce should be “dependable, able to lift 50 pounds, and a safe worker who is able to work in a fast-paced company.”

He complimented the responsiveness of the local South Carolina team in helping the company find its skilled workforce and appreciated “the overall teamwork from everyone there at readySC. They are a great group, and it’s been a pleasure.”

Johnson asserted that “every time I have worked with readySC, it’s been very successful.” He then added, “If you’re a startup and not using readySC, you are not giving yourself a fair chance to be successful.” 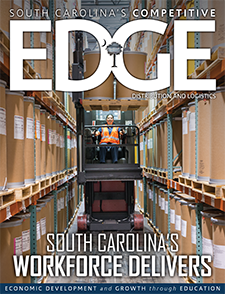