Piedmont Technical College Grad Prepares IT Interns for the Workforce

A 1993 PTC graduate himself, Richie Stone sees the value in providing hands-on experience to the students in his charge. “Our Tier 1 network operations center relies on IT interns from PTC,” Stone said. “They do front-line tech support” which includes monitoring the NOC and resolving any internet or TV channel issues for WCTEL. He explained that the interns come in with a baseline of skills from PTC, and then they take those skills and build upon them.

Stone is aware of his critical role as a mentor and still remembers individual instructors who made a difference for him at PTC. When he struggled with trigonometry, for example, Stone ultimately succeeded because of extra coaching from a caring faculty member. “During my last semester, I did so well that I became a tutor,” said Stone. “It’s all because of my teacher [at PTC].”

His positive experience at the college made such an impression on Stone’s family that each one of his four children has decided to follow in his footsteps and attend PTC.

At WCTEL, Stone continues to use the skills he learned as a tutor to work with interns. “I love being able to give these students the opportunity to come in here and learn. And they share their experience with us as well.”

When describing the qualities that WCTEL seeks in interns, Stone said the best candidates have a natural interest in technologies and a desire to learn. In a continuously changing industry, interns must also be flexible and willing to adapt.

The opportunity to work with cutting-edge technology is one of the things that Stone loves most about his job, and he is willing to bet that the PTC interns do as well. “There’s nothing like coming to work with a smile on your face and looking forward to the day,” Stone said. “Working at WCTEL is great. One of the biggest things I like is the family atmosphere that we have. As a service-oriented culture, it’s the real deal.”

Stone added that the quality of interns coming from the college has been consistently high, and WCTEL has hired several upon graduation. “[The interns] pick up on it pretty quick. I am proud of them.”

West Carolina Rural Telephone Cooperative, Inc. (WCTEL) was formed in 1952 to provide basic telephone service to three rural counties in South Carolina. WCTEL began providing local access to the internet in May 1995 and was one of the first rural telephone companies to provide high speed DSL internet access in 2000. In 2019, WCTEL was named the #1 Fastest Fiber Provider in South Carolina, Small Provider Category, by the BroadbandNow Awards, as well as one of the Top 10 Fastest Internet Providers Nationwide and Top 5 Fastest Fiber Providers Nationwide. 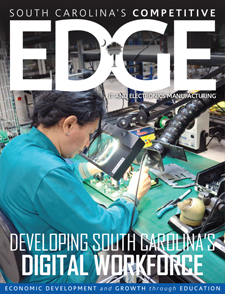