EDGE: Could you tell us about your company’s history in South Carolina?

Gwen Seagraves: Fibertex Nonwovens began in 2016 as a Turkish-owned company called Mogul South Carolina Nonwovens Corporation. Mr. Ekrem Kayali was the owner of Mogul, and he wanted to get a footprint in the United States. He chose South Carolina because it was once known as the textile capital of the world.

The company selected a site in Gray Court, SC, that had formerly housed another nonwovens manufacturer. The building had been empty since 2009, and there wasn’t much to it when purchased but an open warehouse that needed a lot of renovations and upgrades.

Hired early on as employee number five, I was very much involved in the startup. Initially, we hired seven people, and they were also involved in every aspect of the startup, including uncrating the equipment and helping contractors install it.

We officially began production in March 2017. Through the next year, we continued hiring as we transitioned to a 12-hour rotating shift. We have about 40 employees at this site now.

While we were busy growing, our owner had three other companies in Turkey that were also growing very rapidly. In order to focus on the investments in Turkey, Mogul’s ownership decided to sell the U.S. operations in 2018. We were put on the market and acquired by Fibertex Nonwovens in January 2019. Fibertex is a large nonwovens manufacturer with eight factories around the world and over a thousand employees. Since the acquisition, we’ve been transitioning from a small standalone company to being part of a large global company with very diversified products.

EDGE: How did readySC help recruit your workforce?

GS: We started working with readySC from the outset. The readySC team was instrumental in helping us with our recruiting and training plans as well as keeping us on track.

They worked very closely with us on our recruitment efforts, including radio and newspaper ads. They also posted our jobs on their website – www.sctechjobs.com. Then readySC created a three-hour training class to be used as part of our interviewing process. First, we would interview the candidates, and then they would go through the pre-hire training class.

The readySC representative conducted the pre-hire class while making it clear that attendees were not guaranteed a job nor would they be paid to attend. The operations manager, our president and I also attended so we could observe class participation and interaction. That helped us decide who would be the best candidates for job offers. The pre-hire class also allowed us to see that these people were serious about joining the company, which is what we wanted.

Our goal is to develop a culture where we are all one team. We work diligently to hire people that want to work here and be a part of the team. If you have the right people in place and they’re happy with what they do, they are going to be much more productive, and they’re going to be much better employees. So, when we initially interview people, we tell them that we want to make sure we’re a good fit for them as well as find out if they’re a good fit for us.

EDGE: What kinds of skills are you looking for in your employees?

GS: Our operation is unique for this area. There are plenty of automotive manufacturers that are mostly assembly. We’re not assembly at all. Ours is a continuous operation that includes a five-stage process, and we train employees for each area.

EDGE: What are some examples of the kinds of training that readySC has done for you?

GS: Because we believe in investing in our people, we do a lot of training. From the very beginning, readySC has been a big part of our training strategy, and that has been so beneficial. Some of the pre-hire classes they did for us were train-the-trainer, first aid, CPR and AED training.

For our post-hire training, readySC created a scope of work and course outlines based on our input. They wrote out the syllabuses for the courses so I could review them, and they asked us what our goals were for each class. It was a collaborative effort to develop the training, then readySC was there to deliver it when we needed.

The training plan included behavioral-based safety, lean principles, leadership training and culture awareness, even statistical process control. We also had conflict resolution, computer skills, Excel training, keyboard training, and technical writing, which was an excellent course for our team leaders and some of our product and development people. Root cause analysis and problem-solving were also very beneficial programs for our employees, so they could learn how to delve deep into issues and resolve them. Additionally, readySC conducted total productive maintenance training for our maintenance group. The entire training plan was very comprehensive in nature. It covered everything we needed.

EDGE: What did you think of the readySC instructors?

GS: The readySC instructors were professional and available when we needed them. They made things interesting for the students, and their background in manufacturing made it clear that they were familiar with the subject. For example, one of the pre-hire instructors had previously been in textile manufacturing, so she had real-life experience that she could share with the students.

As the training progressed, readySC would check in with us regularly to get our input and adjust where necessary. It was a tailor-made approach that was extremely beneficial, especially for us as a startup company. At the same time, it gave our employees transferable skills that they could take with them anywhere. Overall, I’d say readySC did a superb job of outlining their recommendations and helping it all come to fruition. It was a wonderful experience for us as a startup company.

EDGE: For a company that was not only a startup but was also based in another country, how helpful was readySC in preparing you for success?

GS: Since we began as Turkish-owned and family-owned with no expatriates on-site, startup was a challenge. The company had to learn about compliance in the United States, including Occupational Safety and Health Administration regulations and labor law regulations. Leadership did an outstanding job of dealing with those challenges by planning and putting the right people in the right place to start this facility.

The initial team realized that each of us was responsible for getting this operation up and running. There were many challenges, but to me, it was all exhilarating. I’m lucky to be working with people who are smart and professional. They are like my second family. We’re all in this together and working toward a common goal, which is the success of the company.

It’s a great work environment. We recognize our people, we know our people, we listen to our people and we engage with them. The readySC training helped with that. It demonstrated to our new employees from the very beginning that the company really cares about its folks and is an excellent company to work for. That’s also the message I give new employees during the interview process.

EDGE: What was your top positive outcome from working with readySC?

GS: There are so many positive outcomes that came from working with readySC. One was developing the great relationship I have with the readySC team and the instructors at Piedmont Technical College. I’ve got new friends as well as valuable resources. I wouldn’t hesitate to pick up the phone if I had a question for any of those folks.

Discovering these resources was a wonderful learning experience for me. I found out that I had a team of professionals that I could rely on throughout the process. The overall experience was just outstanding.

EDGE: Is there a single word or phrase that you would say best describes readySC?

GS: I don’t think there’s a single word that describes readySC. I just think that they’re professional and they know what they’re doing. They’re a great organization and good people to work with, and I feel like I have developed a valuable relationship with readySC and Piedmont Tech through this opportunity. I trust that if I need them, they will be there to help me.

EDGE: If given the opportunity to talk to another company about readySC, what would you say?

GS: If someone called me and asked me about readySC, I would explain the very positive relationship that I have had working with them: how thorough, efficient and personable they are. I would tell them about the time that the readySC team put into developing and delivering training, not to mention all the help they gave us with recruitment. A lot of the readySC instructors and coordinators came from manufacturing. They’d been where we were, and that experience showed. The readySC team gave us indispensable advice and assistance that helped us start up our new facility and hire our workforce. Everyone should know that this resource is available for companies.

EDGE: How do you anticipate readySC can help your company in the future?

GS: Now that we have been acquired by Fibertex Nonwovens, the company plans to grow and expand, with the Gray Court facility being seen as a stepping stone to successful business growth. We will definitely be reaching out to readySC again to help us with that process. I’m looking forward to working with readySC again!

Fibertex Nonwovens is the leading global partner in technical and innovative performance-based materials and nonwovens solutions. Headquartered in Denmark, Fibertex has created nonwovens solutions for its customers in over 70 countries for more than 50 years. 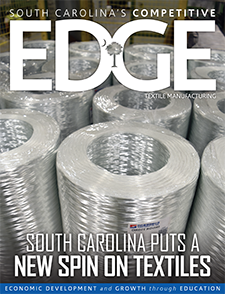